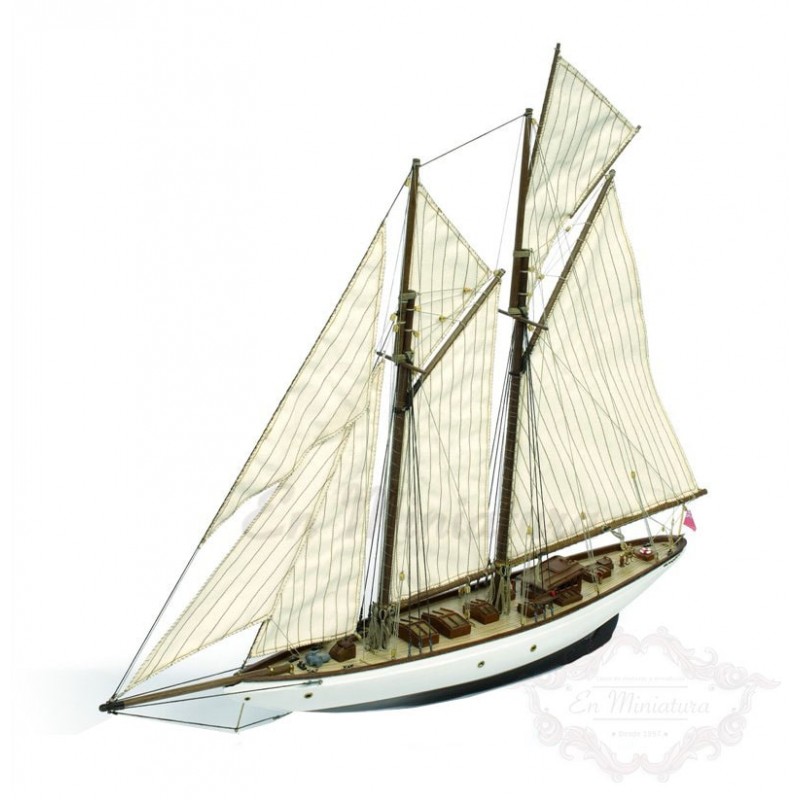 Altaïr, the benchmark yacht. Built in 1931 by William Fife III in Fairlie, Scotland, at the mouth of the River Clyde. Today it is one of the best-preserved classic yachts. Contains the traditional construction kit. It is a wooden and metal boat, scale 1:67. Hollow hull with false keel and laser cut ribs. Pre-cut pieces in wood and turned brass, pieces in cast iron and photo-etched brass for details. Presented in a luxurious box with all components classified and arranged for easy location. Assembly instruction book in 7 languages: Spanish, English, French, German, Dutch, Italian and Portuguese. Detailed instructions with photos of the assembly step by step. It also includes 3 plans with all the views and details necessary for its construction. History: This is not a regatta boat, it was commissioned and built to be a cruising yacht. The Altaïr is a late work of its designer and builder. At the age of 75, William Fife III designed this schooner for Captain Guy H. MacCaw, who wanted to visit the South Seas. The ship never crossed the Bay of Biscay in the following two years under its ownership. It also stayed close to the British shores with the next owner, Walter Runciman. In 1938 Sir William Verdon-Smith bought it and enjoyed it for two seasons. In 1940 it was sold to the British Admiralty, to participate in the war effort. After two years under the Portuguese flag, in 1950 a Spaniard Miguel Sans Mora made it his personal yacht for 34 years. Restored by Southampton Yacht Service in 1987. Its new owner, the Swiss Albert Obrist, was the man who commissioned the restoration with the condition of respecting the original model as much as possible, finally sailing the South Seas. In 1993 it once again had a Spanish owner, later sold in 2005 to its current owner, an American.

ALTAÏR, complete kit, with which you will spend hours and hours entertaining, enjoying its construction. To finally have a work of art at home.

No customer reviews for the moment.